In addition to the features mentioned in the Features at a glance article, Tabular Editor also supports the following features for advanced usage.

As of version 2.7, you can now replace a table simply by copying (CTRL+C) one table - even from another instance of Tabular Editor - and then selecting the table you want to replace, before hitting paste (CTRL+V). A prompt will ask you to confirm whether you really want to replace the table (“Yes”), insert as a new table (“No”) or cancel the operation entirely:

If you choose “Yes”, the selected table will be replaced with the table in the clipboard. Furthermore, all relationships pointing to or from that table will be updated to use the new table. For this to work, columns participating in relationships must have the same name and data type in both the original table, and the inserted table.

As of version 2.1, Roles are now visible in the Explorer Tree. You can right-click the tree to create new roles, delete or duplicate existing roles. You can view and edit the members of each role, by locating the role in the Explorer Tree, and navigating to the “Role Members” property in the Property Grid. Note that when deploying, the Deployment Wizard does not deploy role members by default.

The biggest advantage of working with Roles through Tabular Editor, is that each Table object has a “Row Level Filters” property, which lets you view and edit the filters defined on that table, across all roles: 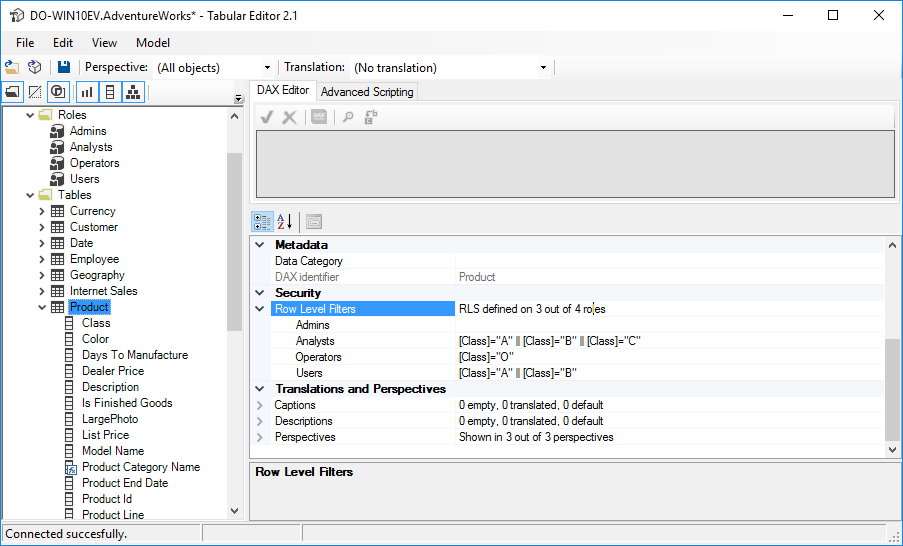 Of course, you can also view the filters across all tables in one particular role, similar to the UI of SSMS or Visual Studio:

You can use drag-and-drop functionality, to script out objects in the following ways:

Tabular Editor comes with a deployment wizard that provides a few benefits compared to deploying from SSDT - especially when deploying to an existing database. After choosing a server and a database to deploy to, you have the following options for the deployment at hand: 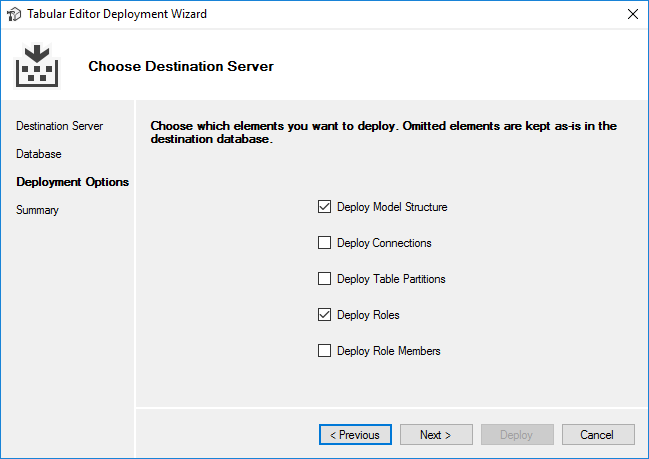 Similarly, leaving out “Deploy Table Partitions”, will make sure that existing partitions on your tables are not changed, leaving the data in the partitions intact.

If you wish, Tabular Editor can automatically save a backup copy of the existing model metadata, prior to each save (when connected to an existing database) or deployment. This is useful if you’re not using Version Control software, but still need to rollback to a previous version of your model.

To enable this setting, go to “File” > “Preferences”, enable the checkbox and choose a folder to place the metadata backups: 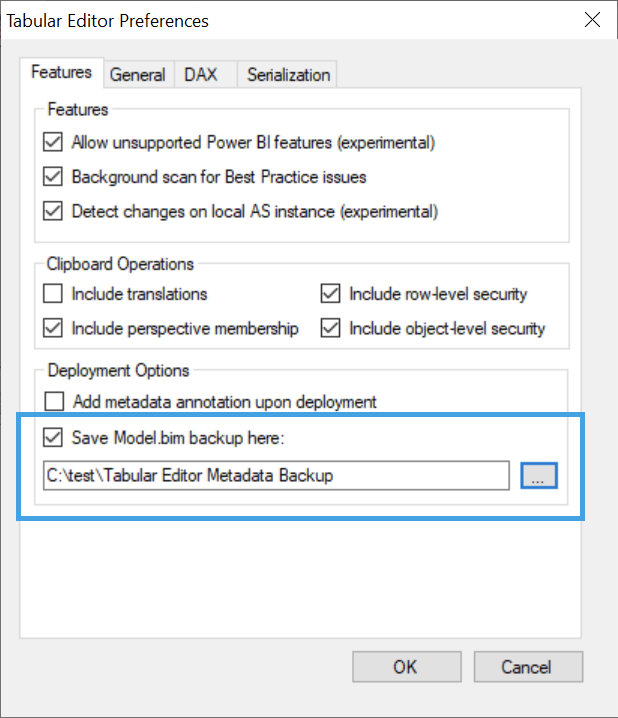 If the setting is enabled, a compressed (zipped) version of the existing model metadata will be saved to this location whenever you use the Deployment Wizard, or when you click the “Save” button while connected to a (workspace) database.

To visualize the dependency tree, right-click the object in the explorer tree and choose “Show dependencies…”

This feature allows you to more easily integrate your SSAS Tabular Models in a file-based source control environment such as TFS, SubVersion or Git. By choosing “File” > “Save to Folder…”, Tabular Editor will deconstruct the Model.bim file and save its content as separate files in a folder structure similar to the structure of the JSON within the Model.bim. When subsequently saving the model, only files with changed metadata will be touched, meaning most version control software can easily detect which changes have been done to the model, making source merging and conflict handling a lot easier, than when working with a single Model.bim file. 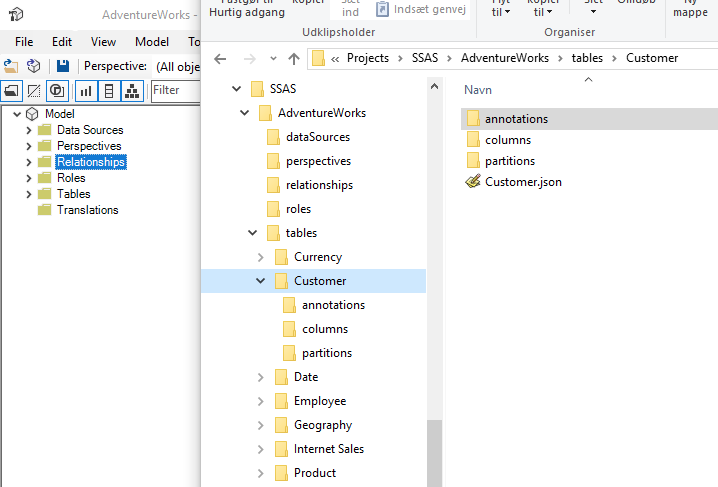 By default, objects are serialized down to the lowest object level (meaning measures, columns and hierarchies are stored as individual .json files).

Additionally, Tabular Editor’s command-line syntax supports loading a model from this folder structure and deploying it directly to a database, making it easy for you to automate builds for continuous integration workflows.

If you want to customize the granularity at which metadata is saved to individual files, go to File > Preferences and click the “Save to folder”-tab. Here, it’s possible to toggle some serialization options which are passed to the TOM when serializing into JSON. Furthermore, you can check/uncheck the types of objects for which individual files will be generated. In some Version Control scenarios, you might want to store everything related to one table in a file on its own, where as in other scenarios you may need individual files for columns and measures. 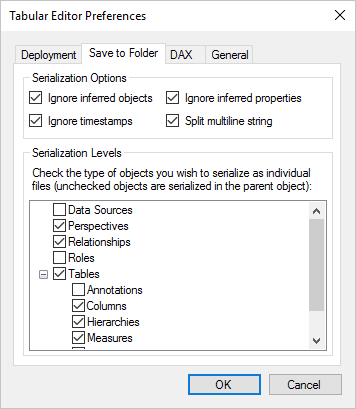 When Tabular Editor is executed, it writes some additional files to the disk at various locations. What follows is a description of these files and their content: