What is Advanced Scripting?

There may be many other common workflow tasks, which are not as easily performed through the UI however. For this reason, Tabular Editor introduces Advanced Scripting, which lets advanced users write a script using C# syntax, to more directly manipulate the objects in the loaded Tabular Model.

The Model object is a wrapper of the Microsoft.AnalysisServices.Tabular.Model class, exposing a subset of itâ€™s properties, with some additional methods and properties for easier operations on translations, perspectives and object collections. The same applies to any descendant objects, such as Table, Measure, Column, etc. which all have corresponding wrapper objects. Please see Scripting API for a complete listing of objects, properties and methods in the Tabular Editor wrapper library.

Say you want to change the Format String of your [Sales Amount] measure in the 'FactInternetSales' table. If you locate the measure in the explorer tree, you can simply drag it onto the script editor. Tabular Editor will then generate the following code, which represents this particular measure in the Tabular Object Model:

Adding an extra dot (.) after the right-most bracket, should make the autocomplete menu pop up, showing you which properties and methods exist on this particular measure. Simply choose â€œFormatStringâ€ in the menu, or write the first few letters and hit Tab. Then, enter an equal sign followed by â€œ0.0%â€. Let us also change the Display Folder of this measure. Your final code should look like this:

Hit F5 or the â€Playâ€ button above the script editor to execute the script. Immediately, you should see the measure moving around in the explorer tree, reflecting the changed Display Folder. If you examine the measure in the Property Grid, you should also see that the Format String property has changed accordingly.

Working with multiple objects at once

This predicate would return true only if the Name of the measure contains the character string "Reseller". Wrap the expression in curly braces and use the return keyword, if you need more advanced logic:

Use the IntelliSense functionality of the Advanced Script editor to see what other LINQ methods exist, or refer to the LINQ-to-Objects documentation.

Working with the Model object

To quickly reference any object in the currently loaded Tabular Model, you can drag and drop the object from the explorer tree and into the Advanced Scripting editor:

Please refer to the TOM documentation for an overview of which properties exist on the Model and its descendant objects. Additionally, refer to Scripting API for a complete listing of the properties and methods exposed by the wrapper object.

Working with the Selected object

All properties that exist on the singular object, also exist on its plural form, with a few exceptions. This means that you can set the value of these properties for multiple objects at once, with just one line of code and without using the LINQ extension methods mentioned above. For example, say you wanted to move all currently selected measures into a new Display Folder called â€œTestâ€:

If no measures are currently selected in the tree, the above code does nothing, and no error is raised. Otherwise, the DisplayFolder property will be set to "Test" on all selected measures (even measures residing within folders, as the Selected object also includes objects in selected folders). If you use the singular form Measure instead of Measures, you will get an error unless the current selection contains exactly one measure.

Although we cannot set the Name property of multiple objects at once, we still have some options available. If we just want to replace all occurrences of some character string with another, we can use the provided â€œRenameâ€ method, like so:

This would replace any occurence of the word â€Amountâ€ with the word â€Valueâ€ in the names of all currently selected measures. Alternatively, we may use the LINQ ForEach()-method, as described above, to include more advanced logic:

This example will append the text " DEPRECATED" to the names of all selected measures where the names contain the word "Reseller". Alternatively, we could use the LINQ extension method Where() to filter the collection before applying the ForEach() operation, which would yield exactly the same result:

To make debugging scripts easier, Tabular Editor provides a set of special helper methods. Internally, these are static methods decorated with the [ScriptMethod]-attribute. This attribute allows scripts to call the methods directly, without the need to specify a namespace or class name. Plugins may also use the [ScriptMethod] attribute to expose public static methods for scripting in a similar way.

As of 2.7.4, Tabular Editor provides the following script methods. Note that some of these may be invoked as extension methods. For example, object.Output(); and Output(object); are equivalent. 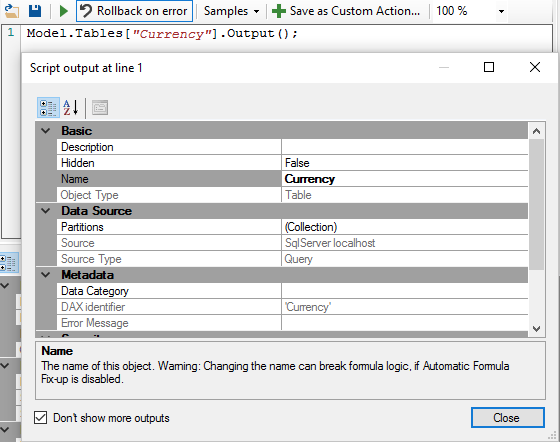 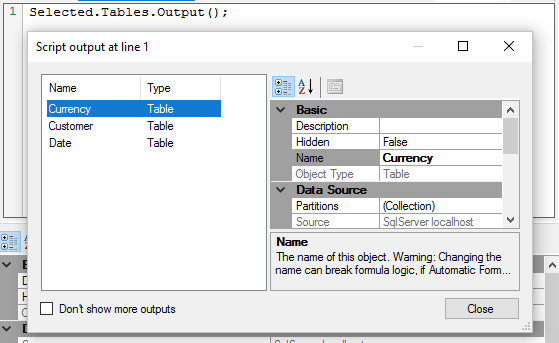 You can tick the "Don't show more outputs" checkbox at the lower left-hand corner, to prevent the script from halting on any further .Output() invocations.

Tabular Editor version 2.8.6 makes it a lot easier to write complex scripts. Thanks to the new pre-processor, you can now use the using keyword to shorten class names, etc. just like in regular C# source code. In addition, you can include external assemblies by using the syntax #r "<assembly name or DLL path>" similar to .csx scripts used in Azure Functions.

If you prefer to compile your scripts using the new Roslyn compiler introduced with Visual Studio 2017, you can set this up under File > Preferences > General, starting with Tabular Editor version 2.12.2. This allows you to use newer C# language features such as string interpolation. Simply specify the path to the directory that holds the compiler executable (csc.exe) and specify the language version as an option for the compiler: 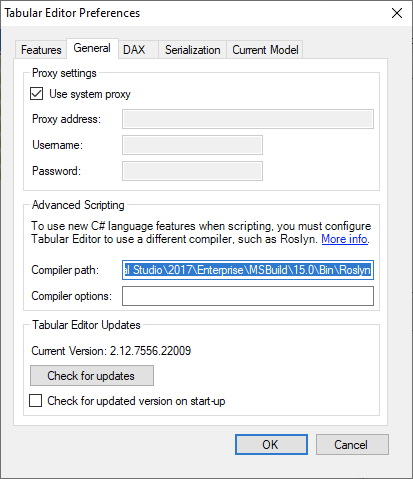